Skip to content
Our existential situation shapes how we interact with those deemed different from ourselves.

Our worldview protects us from our existential fear literally and symbolically. It is probably obvious how many religions comfort us in a literal sense: They explain how we live on after death (e.g., Hades, Heaven, Sheol, reincarnation, etc.). Secular worldviews can also alleviate death anxiety (e.g., such as taking comfort in our recycling of the atoms in our body according to the Law of Conservation of Matter and Energy). It is important to note does not say that any one of these worldviews is correct—either a  secular view or a particular religion. Rather, TMT points out how these beliefs function to provide us with a sense of immortality. Worldviews also provide us with symbolic immortality. When we are part of a culture, we are part of something larger than ourselves, something immortal—our community, our nation. In this sense, our worldview explains where we have come from, and what will endure after us, as well as what our place is in the world. We derive a lot of our self-esteem from being part of a like-minded group, whether that be a large-scale religious community or a small scale niche community (e.g., goths, hipsters).

Because all worldviews are to some extent arbitrary, fictional assemblages about the nature of reality, they require continual validation from others in order remain believable. Exposure to cultures of people with alternate worldviews, especially those that are diametrically opposed to one’s own, therefore, potentially undermines one’s faith in the dominant worldview and the psychological protection it provides. Thus, contact with others who define reality in different ways undermines an assumed consensus for people’s death-denying ideologies, and therefore (directly and/or indirectly) calls both one’s worldview and source of self-esteem into question.

Our worldview is like a winter jacket protecting us from the icy wind of ; it provides us with a shared set of beliefs about the nature of reality to help us deal with our anxiety over death. Worldviews provide us a sense of meaning and purpose, a sense of security in an unsure world. If someone challenges our worldview, they tear a hole in our jacket, letting that icy existential dread in… and we react to that threat. Thus, as individuals we can be verbally or even physically violent, and as societies we can cause tremendous harm to cultures whose existence reminds us that our worldview is constructed and thus not as immortal as we might think.

Worldview threat occurs when the beliefs one creates to explain the nature of reality (i.e., cultural worldviews) to oneself are called into question, most often by a competing belief system of some Other. Because worldview threat weakens our psychological defenses against the awareness of our mortality, we often enact compensatory behaviours against competing worldviews, and TMT researchers have identified 4 forms of worldview defense to reinstate and reaffirm the validity of our worldview and thus protect us from death anxiety: 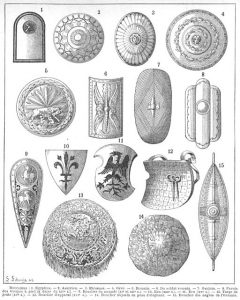 “As a teacher, I imagine everyone entering a classroom as carrying an invisible shield (worldview) with them. As with worldviews, each shield would be different, tailored to the individual holding it. As well, depending on the shield an individual holds, they may be more vulnerable to certain attacks (topics/opinions) than someone with a different shield. Early on, the type and style of shield may be heavily influenced by familial ties, maybe it has a family crest or other signifier. And like a worldview, a shield is not permanent. A different shield could be adapted as the holder evaluates the effectiveness, or lack of effectiveness, of their current shield. Some shields may be more robust than others, being able to put up with more before they yield. And perhaps most obviously, shields are typically meant for protection when they are deployed, similar to worldviews according to TMT.” (B. Bjornsson, 2019)

Is a subfield of social psychology that is derived from existentialism and the works of Ernest Becker. TMT posits that our awareness of death conflicts with our evolved desire to live and that this creates the potential for debilitating existential anxiety (i.e., “terror”). Furthermore, it proposes that humans have attempted to psychologically resolve the problem of death by inventing and sustaining self-esteem-yielding cultural worldviews that help to manage this anxiety. These cultural systems enable people to curtail death related anxiety by providing hope for immortality. According to TMT, immortality can be literal, such as a belief in an afterlife (e.g., heaven). However, we can also attain symbolic immortality through a cultural system (e.g., one’s country) which allows its adherents to construe themselves as valuable members whose memory and contributions will persist posthumously through the permanency of that culture or the objects that iit fosters.

Most commonly these terms refer to the anxiety and fear that comes with knowing that we will eventually die. Existential anxiety can also refer more broadly to the unease that accompanies thinking about any potentially unpleasant aspect of our existence including meaninglessness, mortality, isolation, and freedom and responsibility.

The Grim Educator by C. van Kessel is licensed under a Creative Commons Attribution-NonCommercial 4.0 International License, except where otherwise noted.